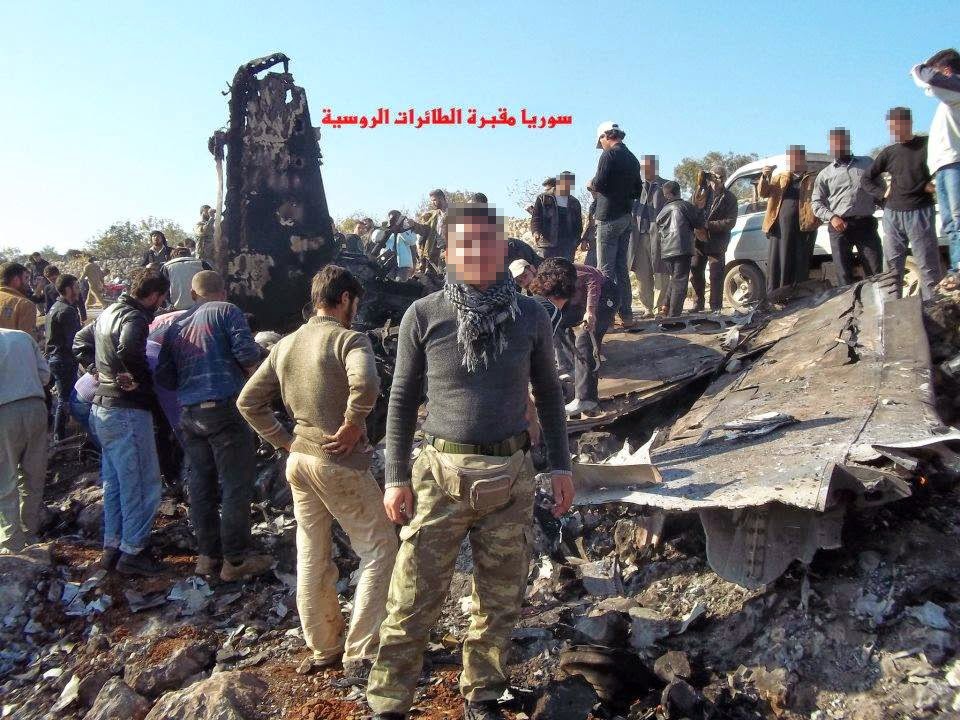 On 28th Nov. 2012, the FSyA units scored their first kill against the most advanced SyAAF aircraft, the Su-24M2.
The Syrian Fencer -serial is still unknown so far- which home base is the T4, carried out an attack sortie in the county of Aleppo before a 9K38 Igla MANPAD successfully hit the aircraft in its way returning to base and brought it down 25km to the west of Aleppo in Daret Ezzeh 'دارة عزة' town. Both pilot Colonel Ziad Dawod 'العقيد زياد داود' and co-pilot -non confirmed- Major Akram Hammoudi 'الرائد أكرم حمودي' ejected at that moment; Rebels drove Lt. Ziad to the hospital of Termanin where he died there suffering serious injuries led to his death as can be seen in various videos, while the fate of the co-pilot is still a mystery till moment. 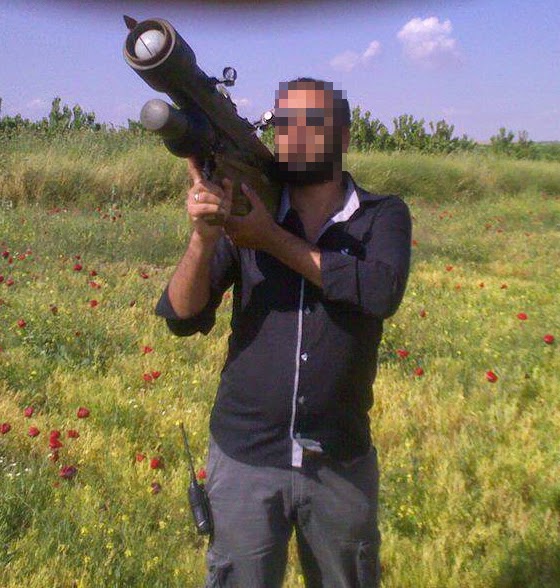 Exclusive photo for Abu Omair with his Igla, the responsible for shooting down the mighty Syrian Su-24M2.
Posted by R.S 6 comments: 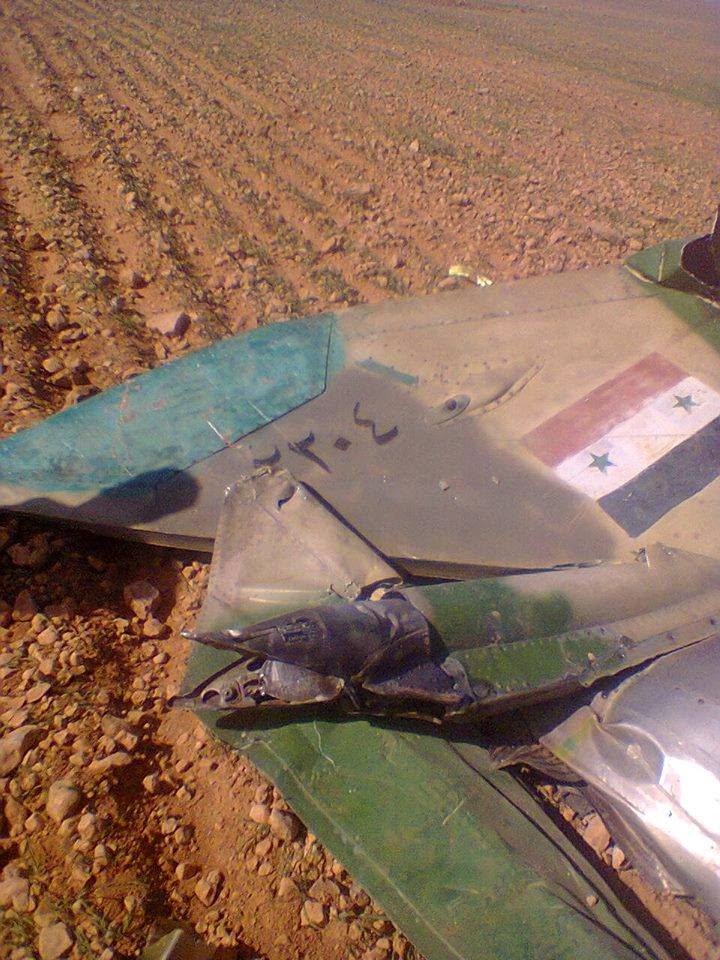 Today 10th Nov. 2014, a Syrian MiG-21bis serialed 2204 and code-numbered 660 operating from Hama AFB and piloted by Col. Tha'er Aref Saqqour 'العقيد ثائر عارف صقور' is downed 45km to the east of the airbase near Sabboura town, the remnant of the GSh-23 twin-barreled cannon and the engine can be seen in this VIDEO and this VIDEO, while it is still unknown whether the bis was hit by a MANPAD or by an AA gun.
Later one, tonight, a graphic photo emerged for the corpse of the pilot whom was KIA. 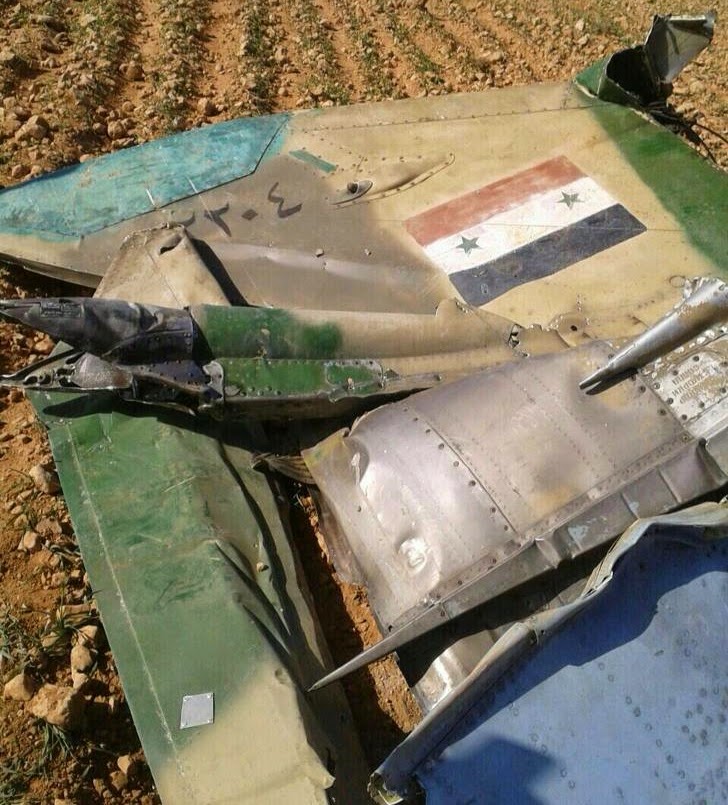 What surprised me after studying these photos is the appearance of a Syrian MiG-21bis dressing a Three-Color Camo! The new color is the Grayish Brown where the serial lays over.
The camos we used to see applied on Syrian MiG-21s through available photos were in Two-Colors camo, Beige & Green or Yellow Sand & Green-Blue.
How would be a great reference to modellers and profile drawers if the fuselage of this aircraft was photographed!
Posted by R.S 4 comments:

SyAAF From The Archive - Part VI 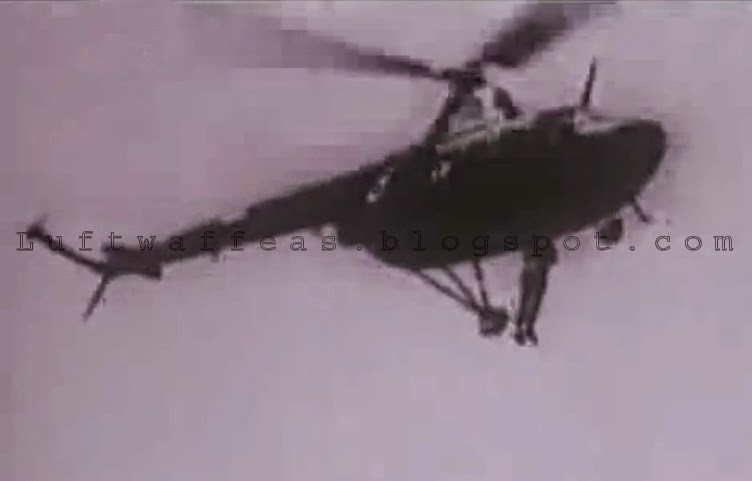 Some of the ever rarest historical photos of SyAAF units EXCLUSIVELY owned by Luftwaffe A.S blog I wanted to post here to allow our great audiences have a look on!
I select the Mil Mi-1 to start with as it was never seen before, even never thought to be delivered to Syrian Air Force! The Mi-1 here appears in a footage of an exercise, notice the soldier jumping down from this mini helicopter. 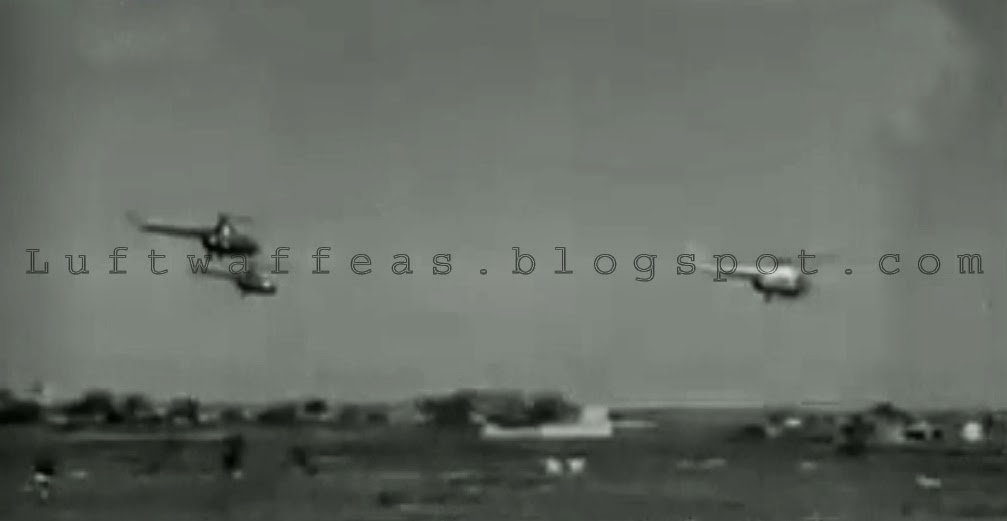 The Mi-1 appeared again in another shot in a pair following a Mil Mi-4, it's still unknown when and how many units of each type was delivered to SyAAF. 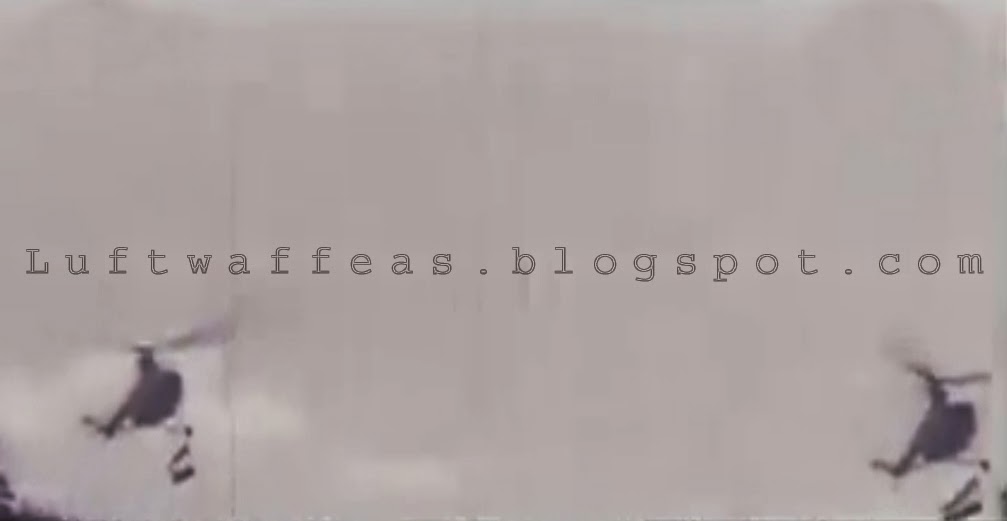 A pair of Syrian Mi-1 passing over Damascus during the ceremony of Syrian Air Force anniversary. 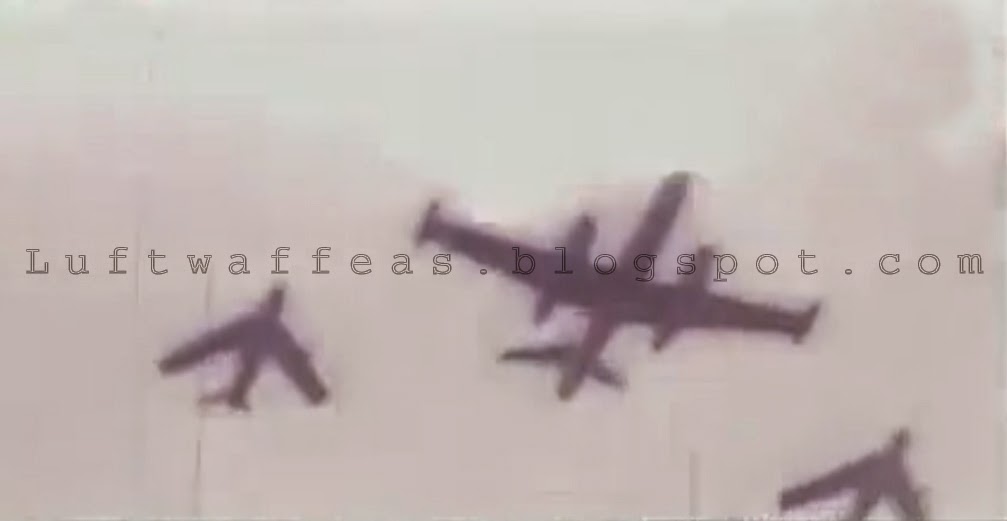 The only photo for the SyAAF Beagle Il-28 in flight!! Here it appears accompanied with a pair of MiG-17 passing low over Damascus in the SyAAF anniversary. 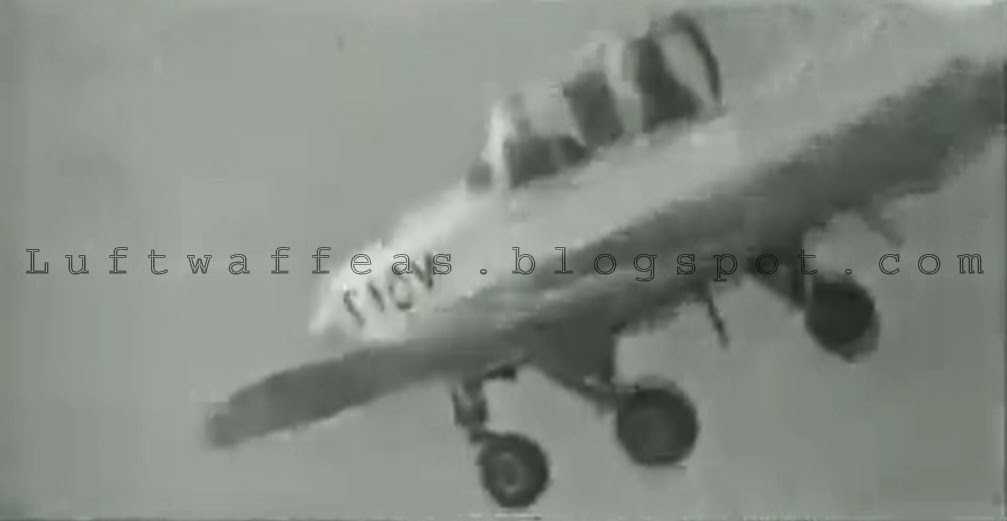 Photo for one of the early examples of SyAAF MBB 223 Flamingo serialed 2157, used to be camouflaged in White & Blue. 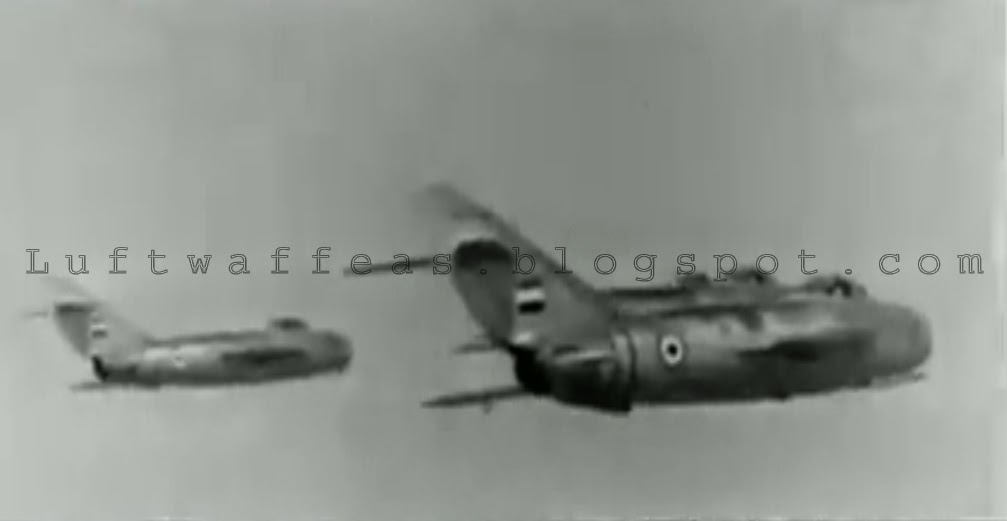 Formation of SyAAF MiG-17, the absolute beauty of the Syrian Air Force! 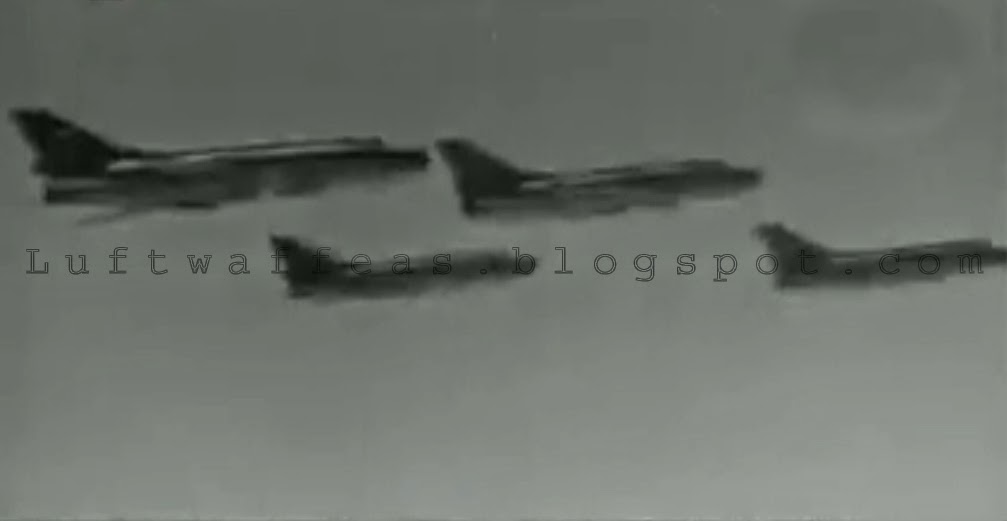 N.B. Explicit written permission from the author is required prior to utilize any of the above materials in any kind of physical or electronic media.
Posted by R.S 1 comment: 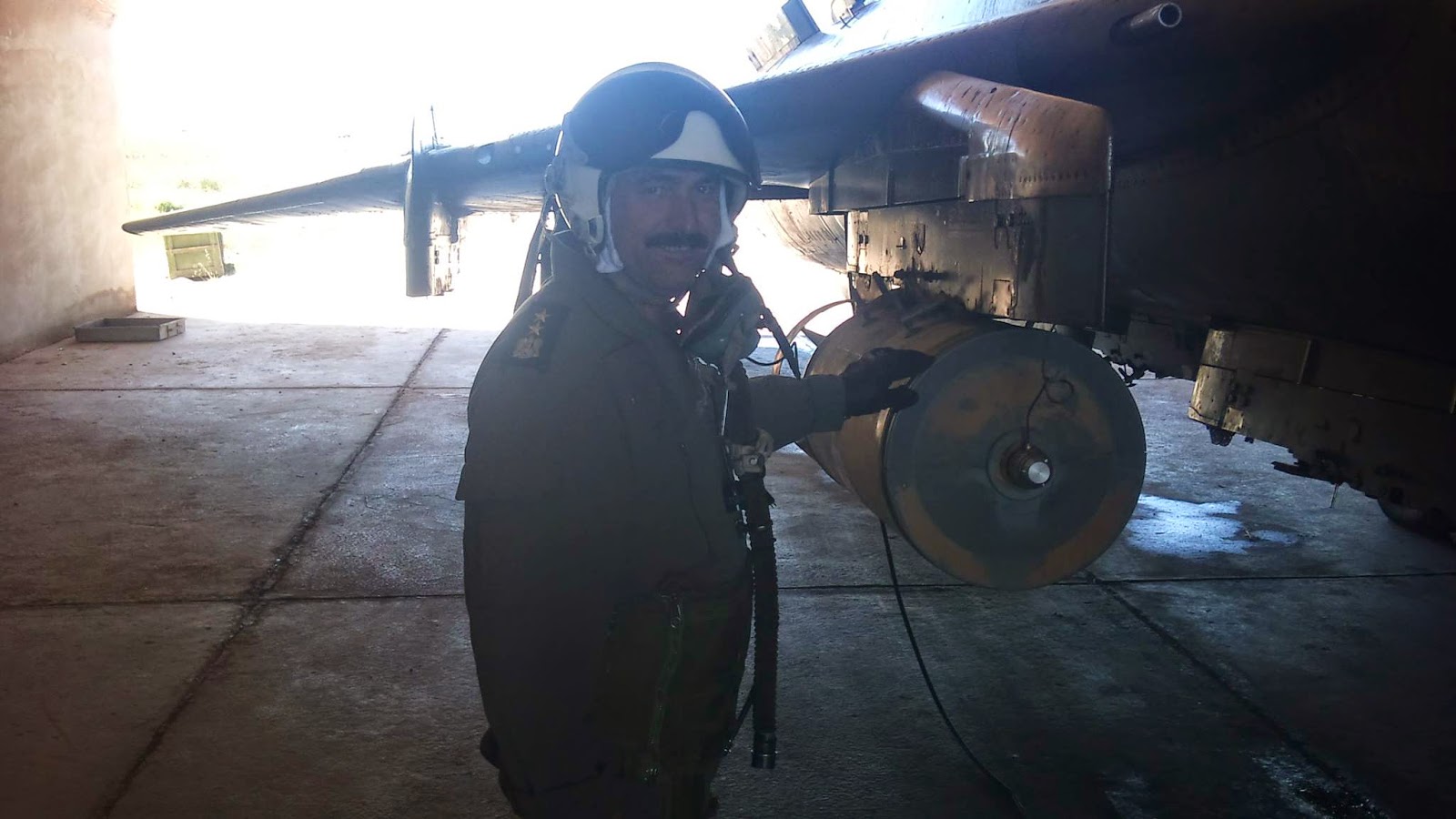 On 25th July 2013, a video from Tabqa town was published stating that a 'MiG' was hit by rebels and crashed not very far from Tabqa AFB, the footage confirms the accident as can be seen HERE. Later on and just recently, It is confirmed by pro-regime news that the Colonel Malek Muhammad Abbas ’العقيد الطيار مالك محمد عباس’ was KIA while carrying out an attack sortie over Al-Tabqa area, that date.

Luftwaffe A.S' own sources confirmed he was flying a Su-22M-3 based in Sh'eirat AFB, the Su-22 in question can be seen above.
Posted by R.S 3 comments: 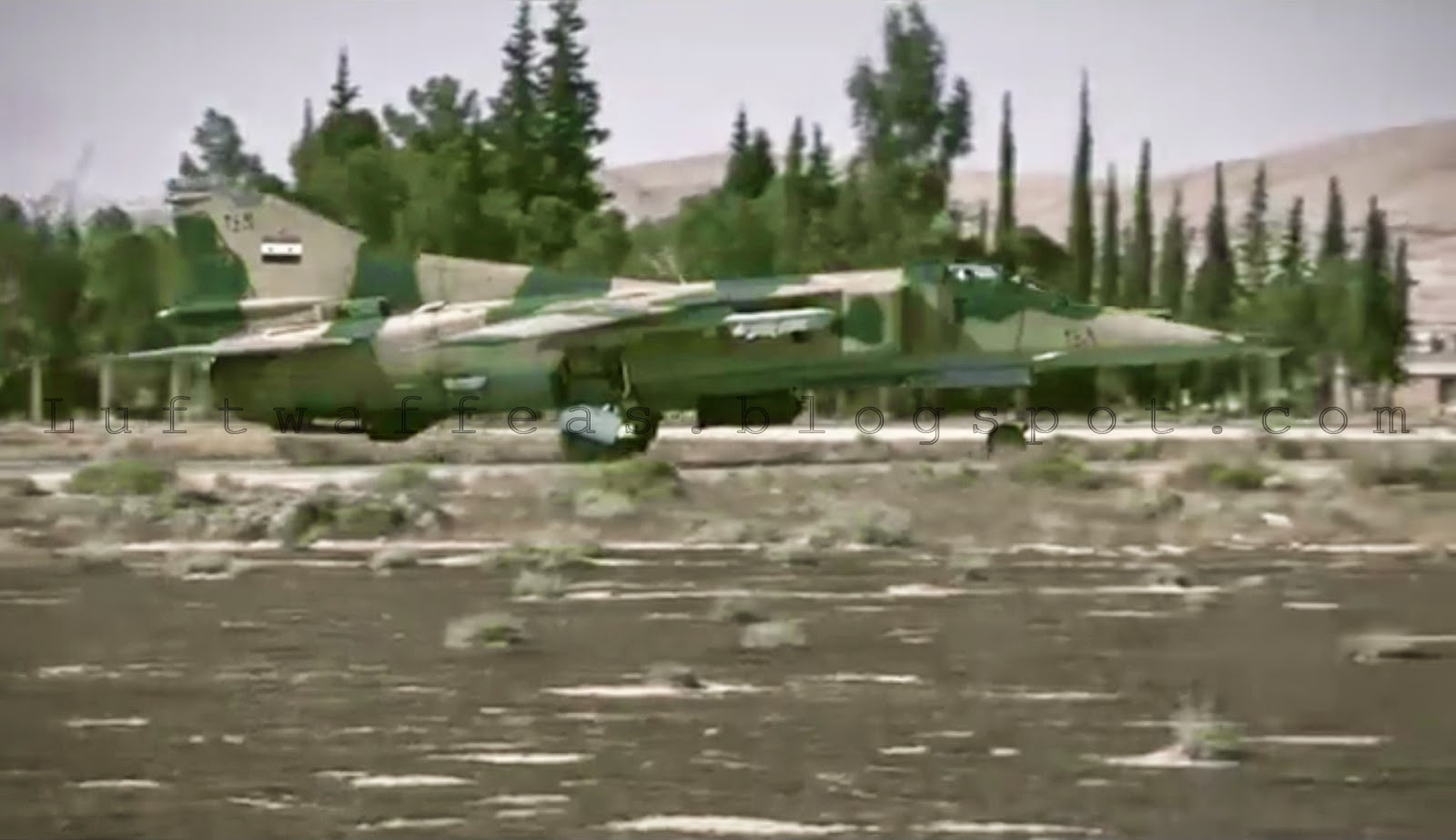 The newest photo of this bomber/attack variant of MiG-23 appeared in a video recently published in the anniversary of Teshreen war of 1973.
The BN in question appeared carrying a new serial 2409, which means the SyAAF might received this variant in two batches, the first batch carried the serial 16xx while the new batch is serialed 24xx. 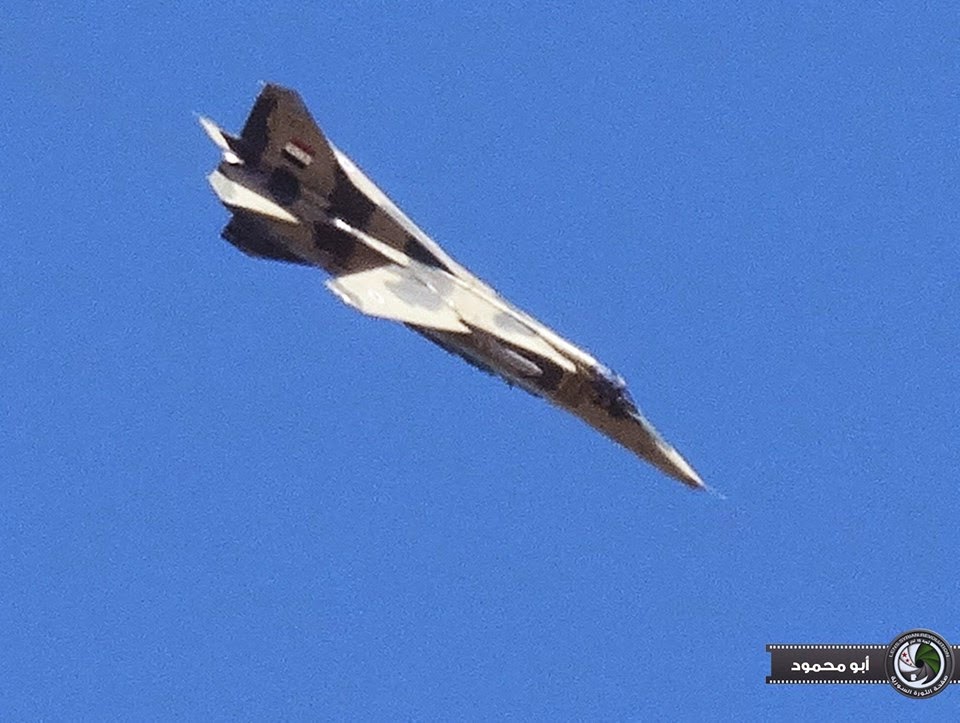 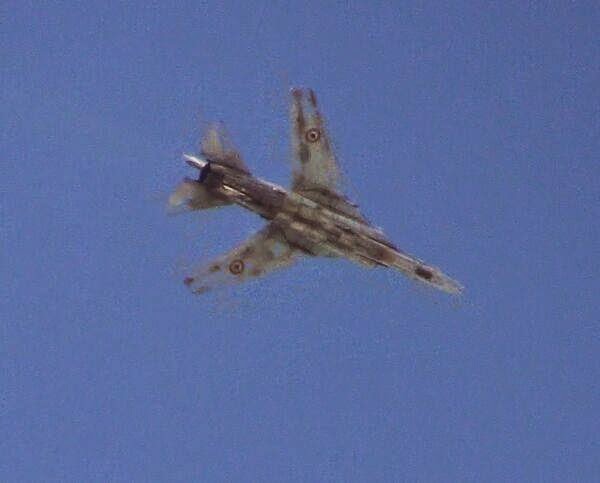 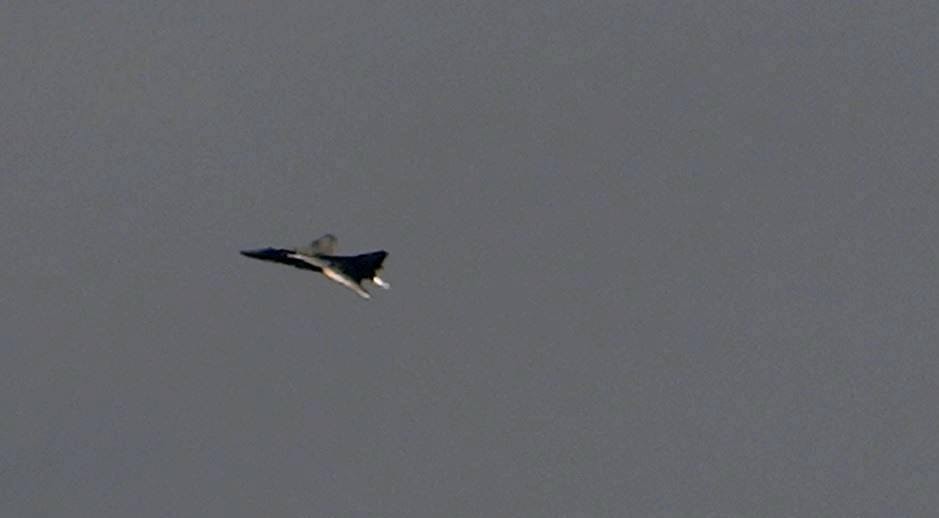 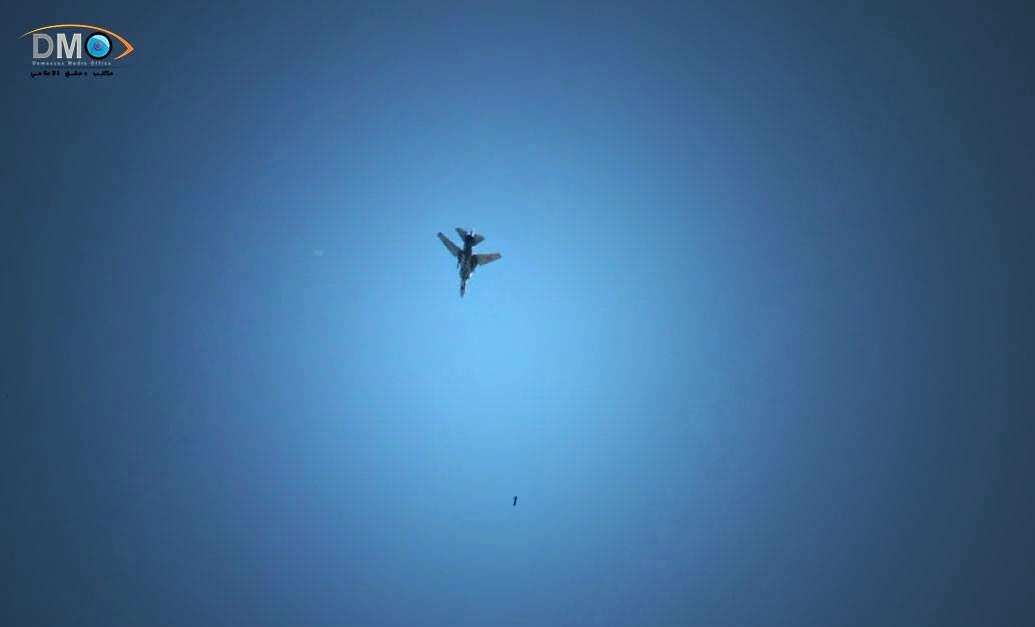 The BN joined intensively in the offensive of Mleha earlier this year, this one was spotted releasing a FAB over Mleha on 29th April 2014.

In many videos, the BN was spotted taking off from Dmeyr AFB, this one was photographed on 7th Nov. 2012 flying low over Dmeyr town. 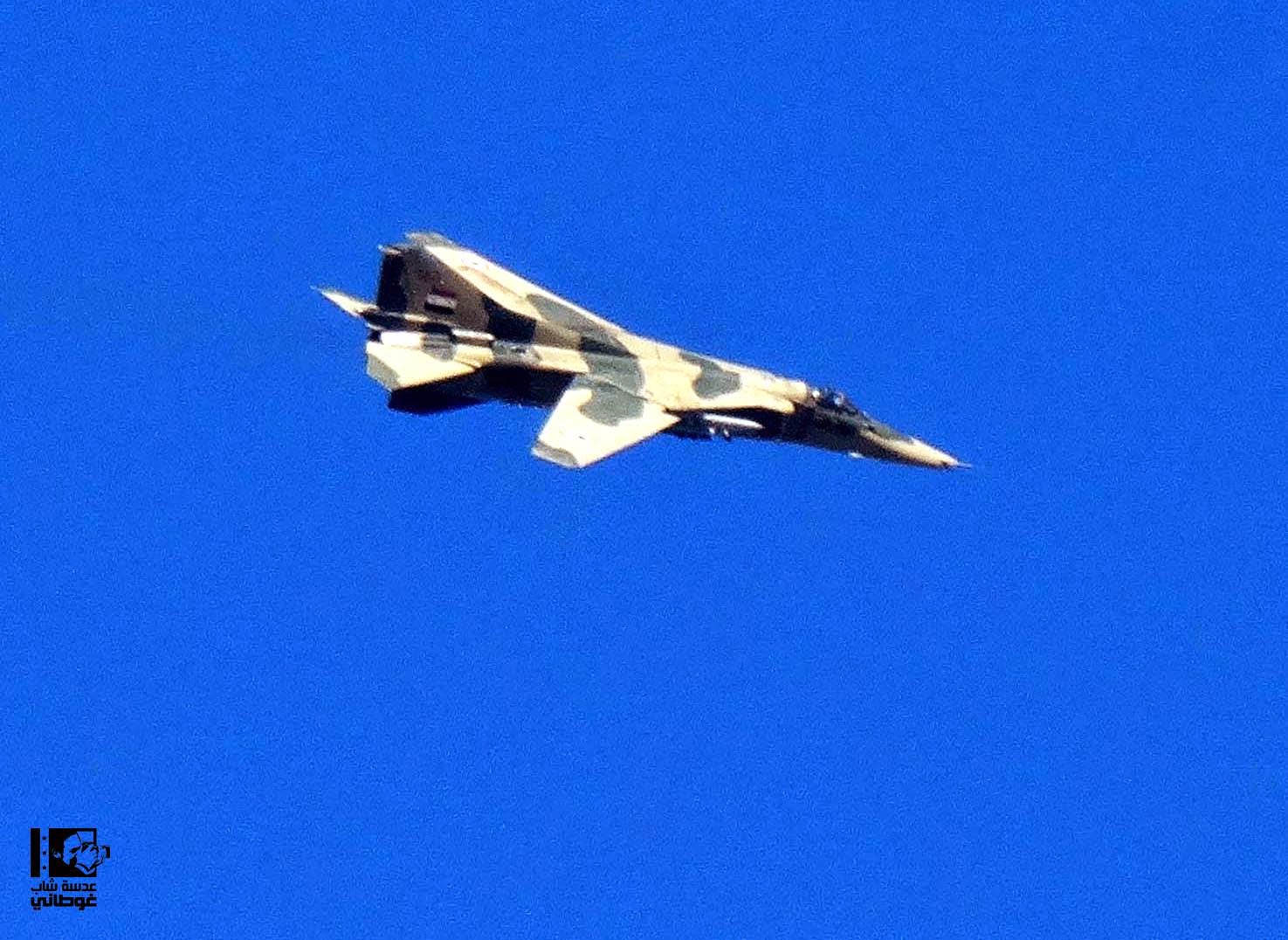 Stunning shot for a SyAAF MiG-23BN shortly after it landed in unidentified airfield, notice the double-bomb rack under wing pylons.
Posted by R.S 1 comment: 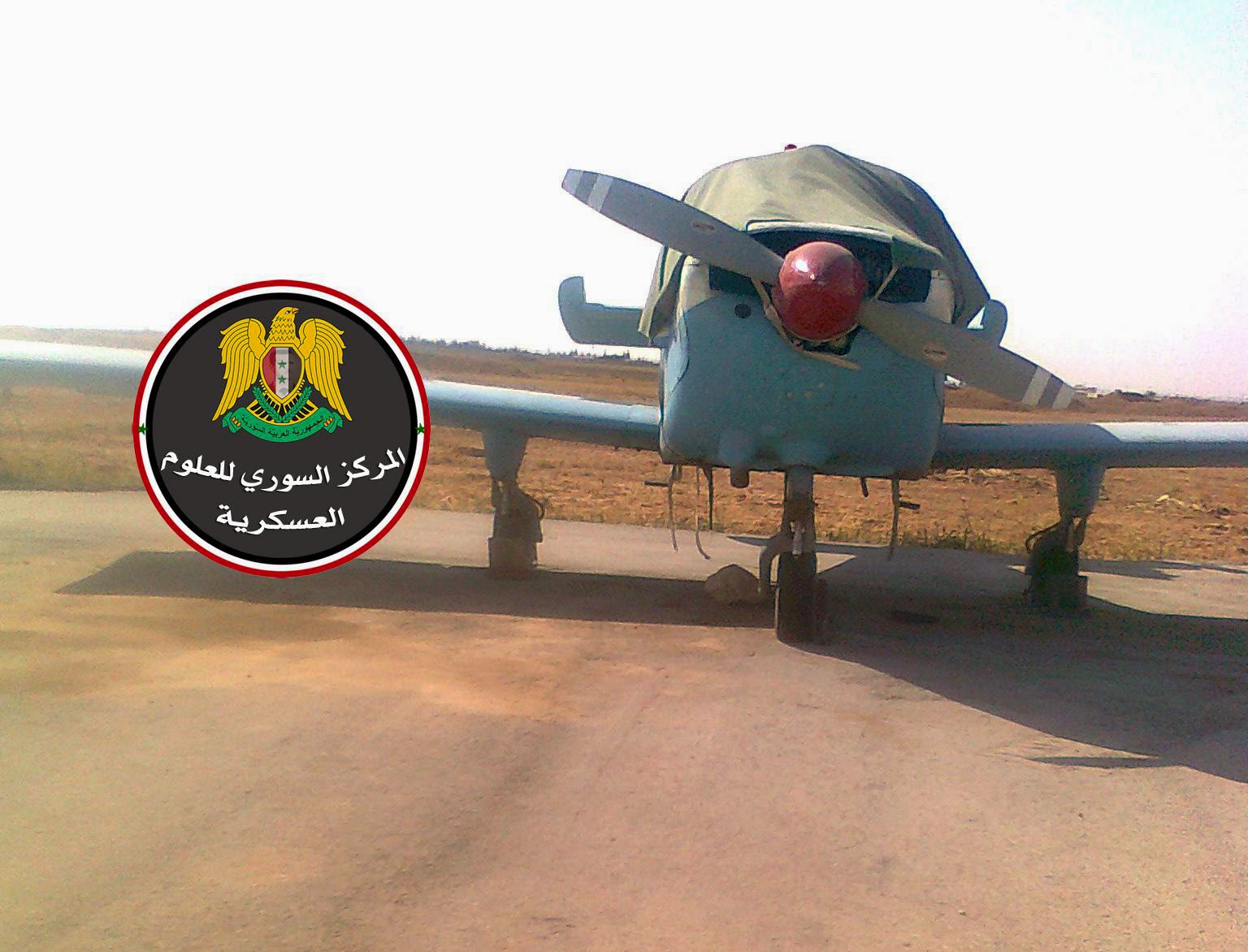 ﻿
MBB/Siat 223 Flamingo photographed in Kweres (Rasm El-Abboud) AFB prior to shifting these basic trainers from the central tarmac to hide them behind the ceremony stage. 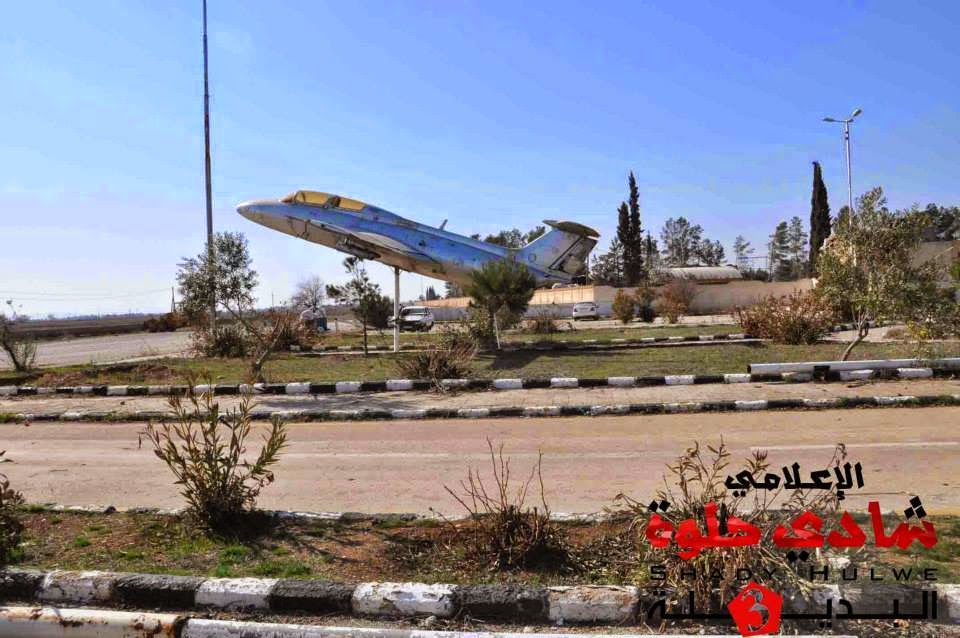 SyAAF L-29 Delfín in display at the gate guard of Kweres AFB. 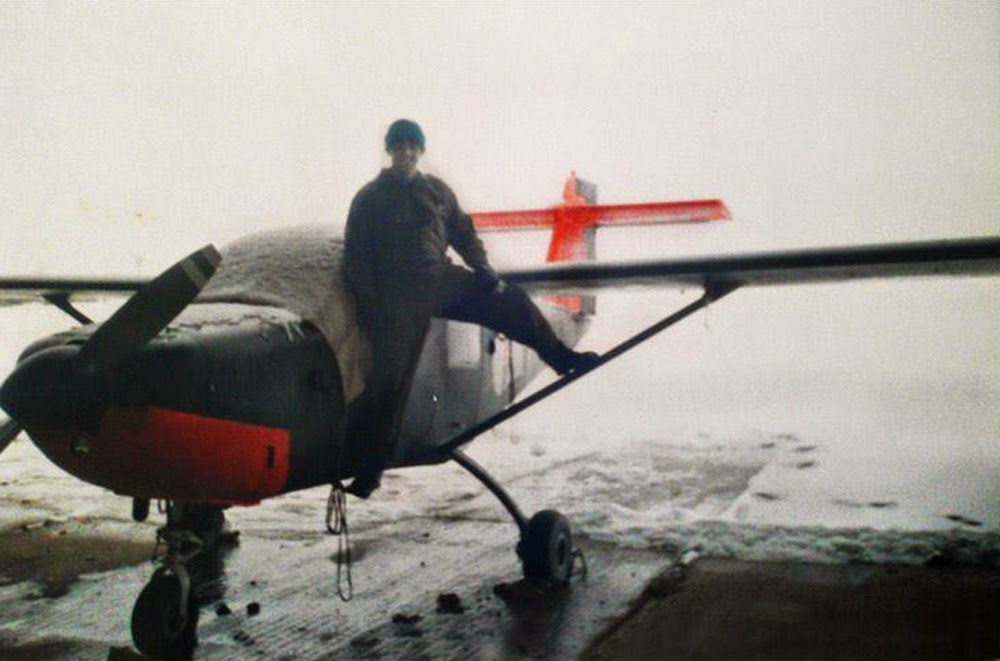 The only available photo of MFI-17 Mushshak. SyAAF received two examples of this Pakistani made basic trainer and both are based in Kweres AFB as well. 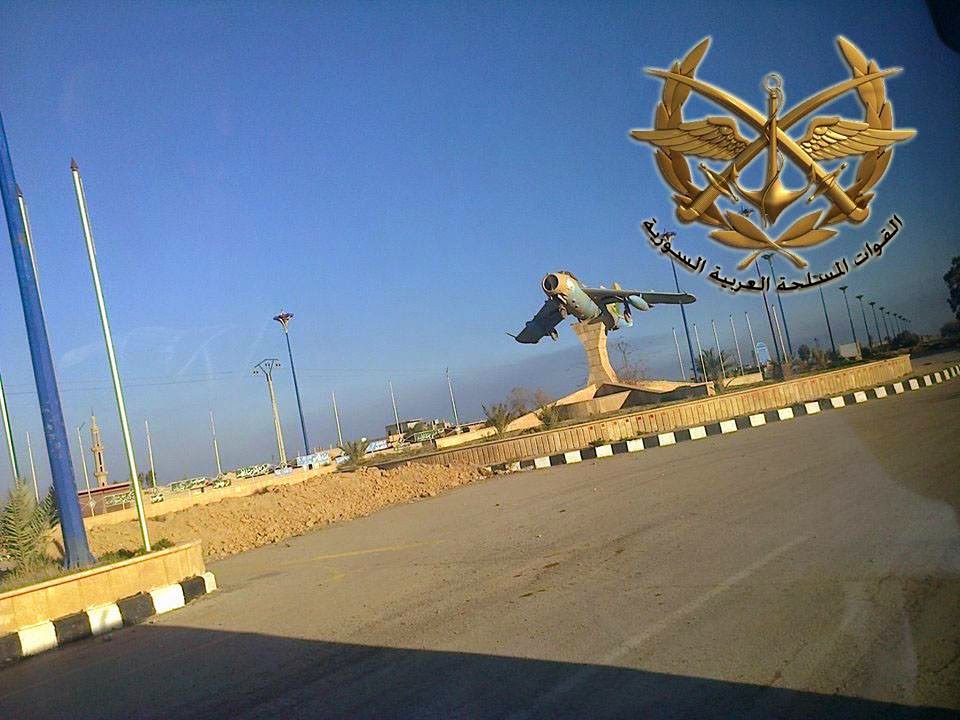 SyAAF MiG-17 in display in the famous 'Al-Tayyara' roundabout in Deir EzZour city. 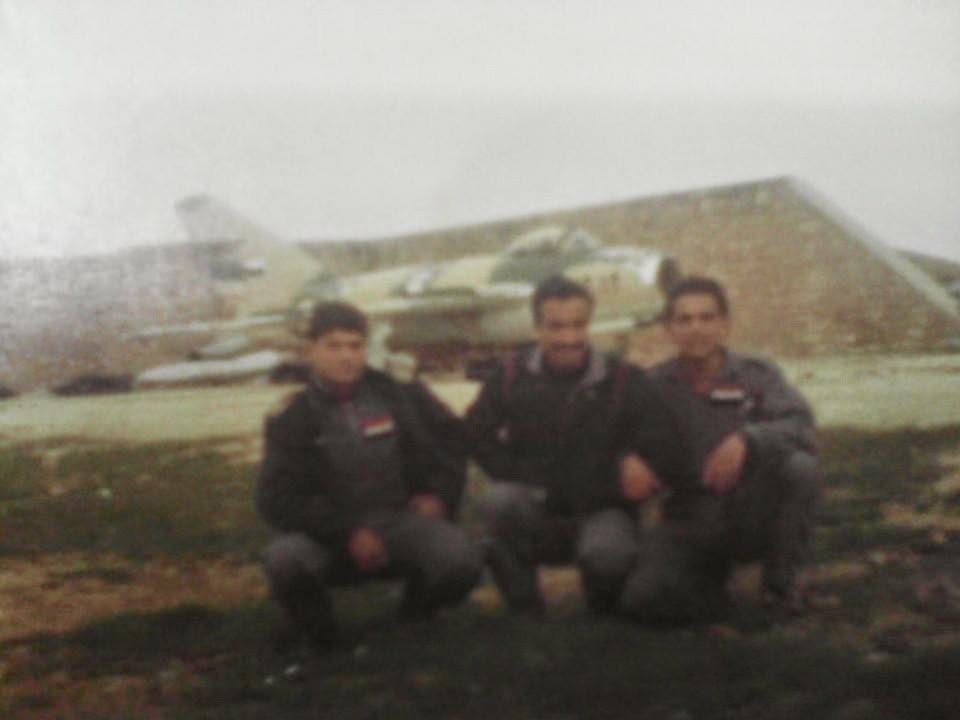 One of the rarest photos of a camouflaged SyAAF MiG-17. This still is taken at Kshesh AFB in 1984. 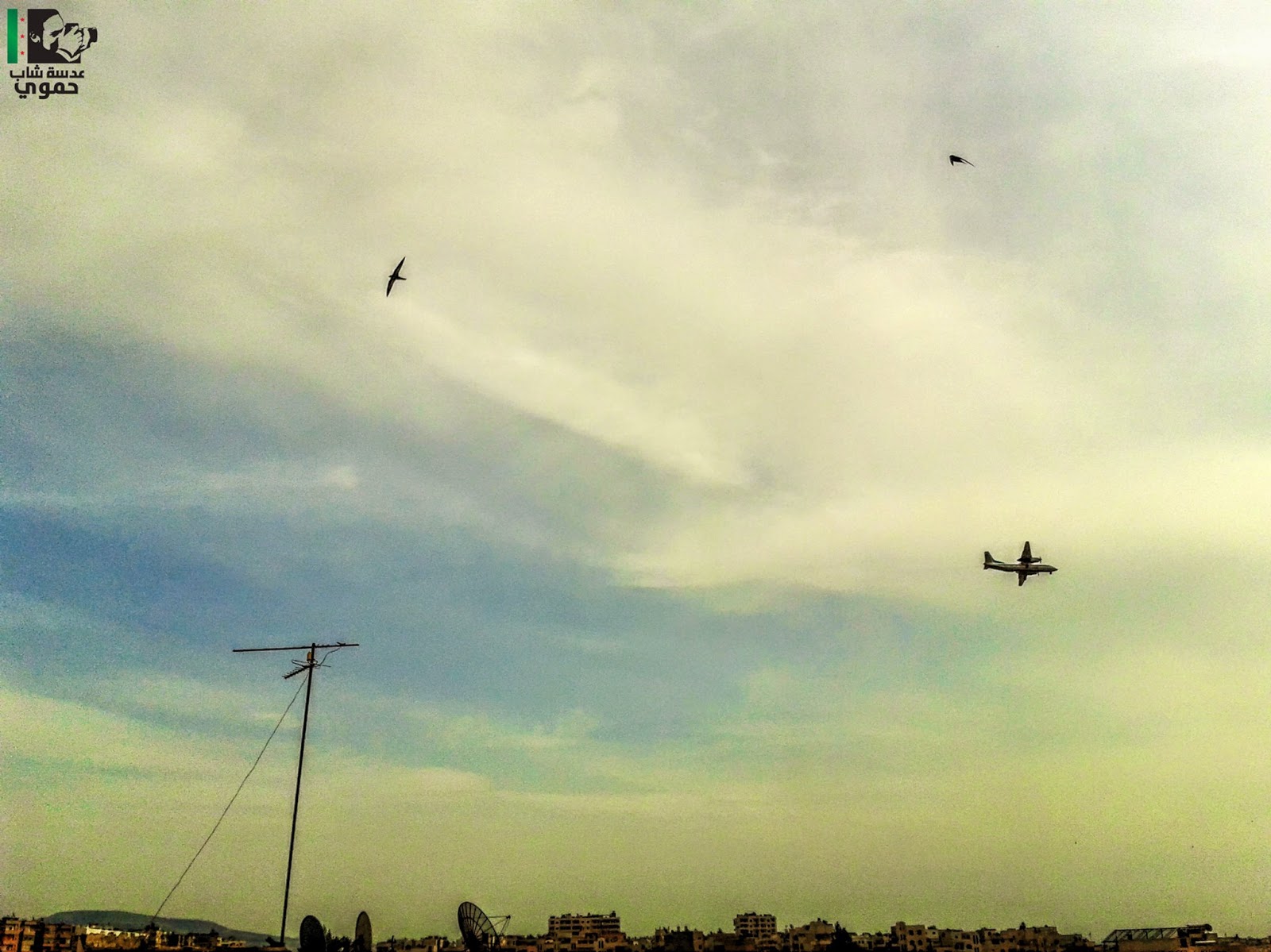 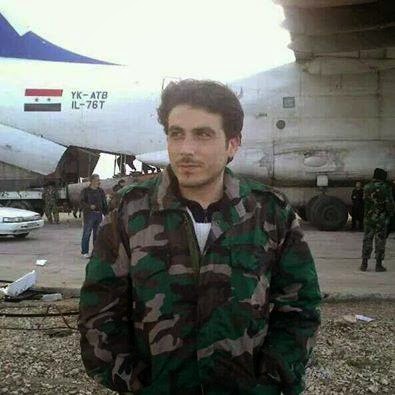 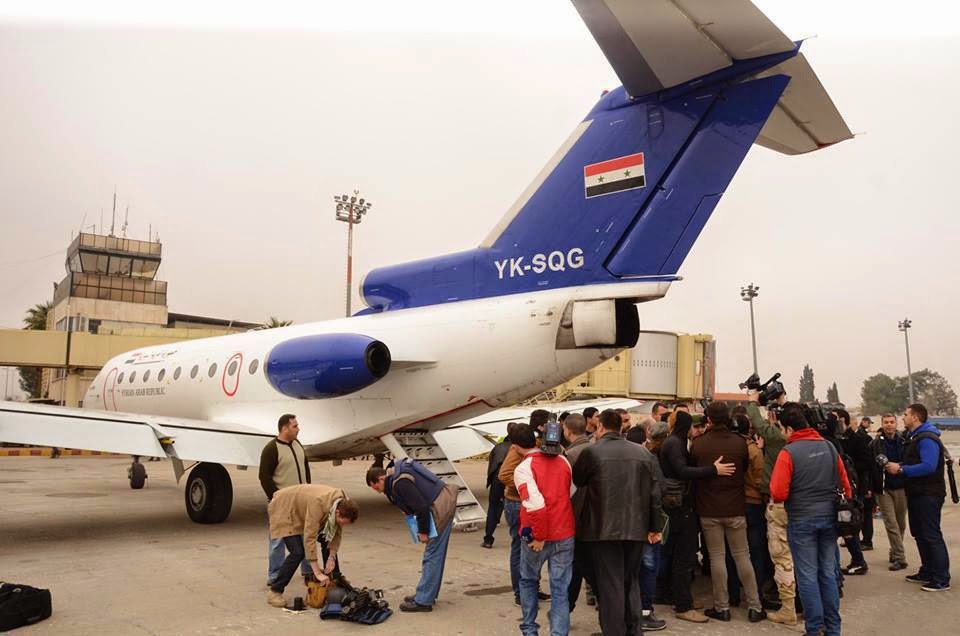 The only and historical flight of the Syrian Air YK-SQG Yak-40 from Damascus IAP to Aleppo IAP on 22nd Jan. 2014 after almost a year of halting flight to the latter. 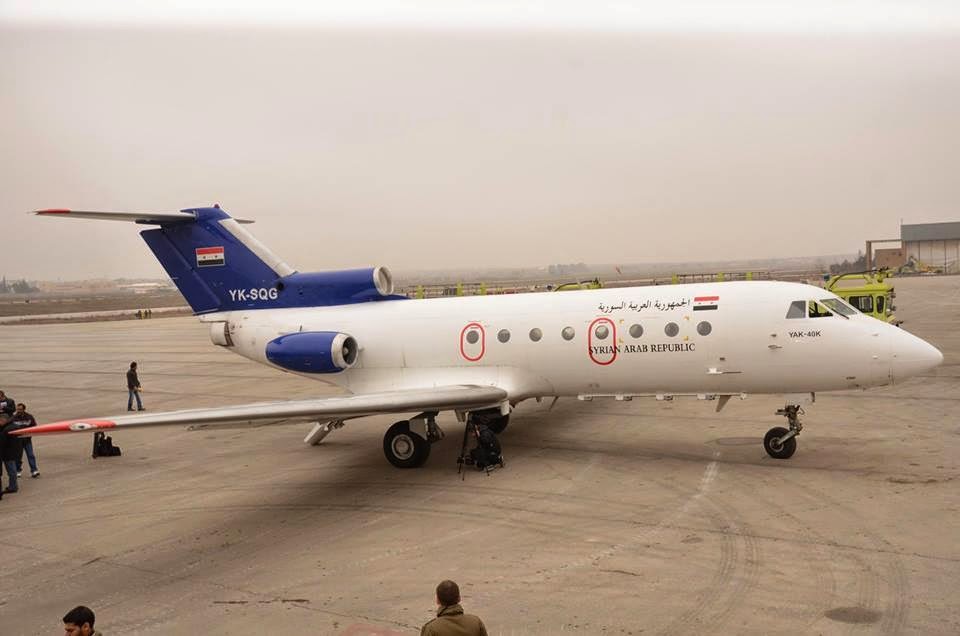 Another take of the same Yak-40 in Aleppo IAP, no news about any other civil transporter landed in Aleppo IAP since that event.
Posted by R.S No comments:

Below is the list of spotted 'Aircraft and Aerial Vehicles' over Syria during the month October 2014: